New Hampshire homeschoolers have the freedom to learn using any resource and method they wish and sometimes they are quite creative!

The Batten family worked on a history project about how a bill becomes a law, and the student created a board game. How cool is that? Below is her story about the project.

History Project: How a Bill Becomes a Law Board Game

Currently, I’m studying Notgrass history: Exploring Government.  It is a project-based curriculum with new projects in each unit.  This past unit -unit 4- I began studying Congress; specifically, the long and complex process of how bills become laws.  For this particular unit, the suggested project ideas didn't seem all that interesting, so I decided to create my own.  I chose to design a board game, because passing a law requires many detailed steps which I wanted to illustrate in a fun, factual way that you would actually remember.

After lots of reading, close research, and careful planning, I came up with this game!  The goal of the game is to be the first one to have their bill become a law.  The board follows the path bills take; beginning as ideas and traveling through both chambers of the bicameral Congress before (hopefully!) becoming laws.  I also included facts about the House and Senate and how hard it is to pass a law.  After writing your bill on one of the game pieces, it will start in either chamber of Congress (at the US capitol building); the Senate (blue) or the House of Representatives (yellow).  Before being made into a law, the bill must not only be approved by the House and the Senate, but also the joint committee (green), made up of members of both houses (yellow + blue = green).  Finally, your bill must be sig 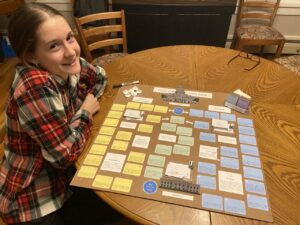 ned into law by the president (at the White House).

You must pass through all 27 steps the government takes while learning exciting facts, dodging obstacles (and extra spaces like the filibuster) that try to get you stuck or sent back to start.   You’ve probably heard about this process before, but you might not realize how hard it actually is to achieve.  Of the over 10,000 bills that are introduced to Congress each year, under 5% of them become laws!  Since game play mimics passing a law in Congress, you can imagine that makes for a challenging game!  On top of that, the dice and cards add an element of chance which furthers the difficulty since there is really no skill involved: it's a game of luck!