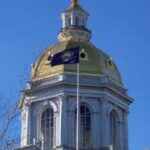 Public hearings are the best opportunity to communicate with committee members and share your opinion. The State House (with the golden dome) is located at 107 N. Main Street in Concord. The Legislative Office Building (LOB) is located immediately behind the State House at 33 N. State Street. There is on-street parking surrounding the buildings with limited meters (usually two hours). For a longer stay, consider area parking garages or parking in nearby neighborhoods and walking. We recommend car-pooling when possible. Here is information about Concord parking.

For Senate hearings, sign the white sheet on a side table just inside the door to indicate your support or opposition for a bill, and if you intend to speak. The protocol is a little different in the House. The public may sign the blue sheet near the room entrance to indicate support or opposition to any bill; fill out a pink card if you intend to speak. If possible, provide written copies for each member plus the committee secretary. Generally, committee chairmen limit remarks to three minutes or less. Personal stories are most effective. If you are unable to attend hearings, email the committee, or better yet, call members individually. Indicate if you are a constituent.

Bills may have an executive session any time after the public hearing. This is when the committee discusses and votes on legislation. The committee makes one of four recommendations: Amendments (-A) may be introduced; Inexpedient to Legislate (ITL) which is to kill the bill; Ought to Pass (OTP) which is a recommendation to support the bill; or to send it to Interim Study (IS) which is to continue work on the bill. Committee recommendations are very influential when the entire chamber votes. Consequently, prompt action on legislation is highly recommended.

Bills retained from the previous session are the first addressed by the chamber in the second year of the biennium.

Once bills are exec’d, they are usually scheduled for a vote by the entire body soon after. This is when all members of the House or Senate will vote YEA (to support the committee’s recommendation) or NAY (to oppose the recommendation). Floor amendments may be introduced. Contact your legislators at least one day before the session with brief, polite messages and mention you are a constituent.

In the closing several weeks of the legislative session, any bills that were amended by the non-originating chamber must return to the first one for a vote. They may vote to concur (accept), non-concur (kill the bill), or meet in a committee of conference to reconcile the difference between the two versions. If additional changes are recommended by the Committee of Conference, both chambers must again vote on the new version of the bill. The Senate may add non-germane amendments to bills, so it is critical to monitor any changes to pending legislation. The House may make amendments, but is limited to germane issues.

If a bill passes both the House and Senate, it then has administrative reviews to become enrolled before heading to the Governor. If the legislature is not adjourned, the Governor has five days (not including weekends or holidays) to sign, veto, or allow the bill to become law without his signature. If the Governor vetoes a bill, the bill returns to the originating chamber for the first veto override vote, which needs two-thirds of the membership in attendance to pass. If that is achieved, the bill advances to the second chamber which also needs a two-thirds vote of membership in attendance. If that is achieved, the bill becomes law without the Governor’s signature. If it does not occur, the veto is upheld. If the legislature has adjourned, the Governor has five days to act on the bill. If it goes unsigned, the bill dies; this is referred to a “pocket veto.”