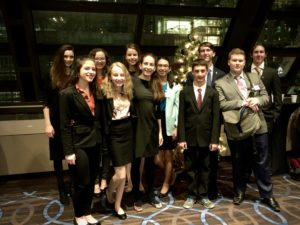 The atmosphere of Model United Nations (Model UN) conferences is something indescribable. As an extracurricular activity that draws together students from across the world, Model UN is a diplomatic competition that involves the simulation of international or national organizations. Students represent countries or officials in different committees, debating and devising solutions to global issues. As the Mosaic Model UN (MOSMUN) delegation, we have been the only homeschool team in the Granite State since our inception in 2014. Since then, we have attended 10 conferences across the Northeast and Canada, and our delegates’ hard work has earned us numerous awards. This past November, we packed our bags and headed to the Secondary Schools’ United Nations Symposium (SSUNS), McGill University’s high school conference in Montréal, Canada.

With over a thousand participants from all across North America, and even international delegates from countries ranging from China to Panama, SSUNS was a truly international conference. Between committee sessions, our delegation explored the city, experiencing everything from Metro trips and the beautiful Notre Dame cathedral in Old Montréal to traditional French-Canadian cuisine and indoor markets. After committee sessions concluded each night, we attended a variety of events for SSUNS delegates, including networking events, a movie night, and a delegate gala.

At this conference, two of our delegates, Angus MacPherson Macbeth and Annalise Kuhlmann, had the opportunity to participate in United Nations General Assemblies. These committees often include over a hundred delegates who debate topics and issues that are integral on the world stage.

Representing Mexico in ECOFIN, the United Nations’ Economic and Financial Committee, Angus learned about topics such as the prevention of illicit financial flows, the regulation of cryptocurrency, and external debt in preparation for SSUNS. In hindsight, Angus believes that “the reason it is important to learn about these issues is that it helps you have a better understanding of how economics on the global scale works. Economics also plays a very big role in a country's decision making and it ties into many other topics.” SSUNS was Angus’s fourth Model UN conference and part of his second year on the team.

On the other hand, Annalise was assigned to represent Mexico in UNCOPUOS, the United Nations Committee on the Peaceful Uses of Outer Space. Debating topics such as space law and climate change, human rights and peace in outer space, and space traffic management, she is currently doing Model UN for her third year. “As we learn more and more about space, it becomes increasingly important for us to debate these topics to ensure the safety of everyone on earth,” she believes. Aside from delving into areas quite literally out of this world, Annalise’s favorite part of the SSUNS experience was “the overall energy of the conference.”

Meanwhile, our team also had delegates in specialized or crisis committees that simulated non-United Nations organizations, involving faster paced debate and responding to various events and updates along the way.

Ilinca Drondoe, who is the Vice President of MOSMUN, was excited to attend SSUNS this year as her seventh Model UN conference. Representing Japan in INTERPOL, Ilinca debated the topics of surveillance, bioterrorism, extradition laws, and diplomatic immunity. “Participating in Model UN has introduced me to important global issues and amazing friends, as well as inspired my passion for international relations and diplomacy,” Ilinca expressed. “I enjoyed this committee because the topics are all so vital and relevant, especially to Japan as the host of the upcoming 2020 Olympics. Aside from debating these issues, my committee responded to bioterrorism attacks, INTERPOL data breaches, and border crossing criminals. As a part of preparing for this committee, I studied how terrorism and crime can be prevented and prosecuted by governments and international law enforcement, areas which were new to me and I now find deeply fascinating!”

Another unique committee one of our delegates participated in was the Press Corps. Acadia Knickerbocker was assigned to represent the decorated German news journal Die Zeit, which she said was “a really great experience” to study. She and the other members of the press had the responsibility of reporting on and publishing articles about various other committees at SSUNS while remaining faithful to the news source they were designated. Throughout the course of SSUNS, Acadia got the opportunity to conduct interviews, hold press conferences, and participate in debate on topics such as the ethics of journalism. Overall, she concluded that her favorite part “would have to be speaking. I love being able to share my ideas and convince other delegates to collaborate.”

There are numerous benefits derived from participating in Model UN. “Cooperation, critical thinking, diplomacy, researching, and forethought are the cornerstones of a successful Model UN delegate, and the effects of learning these things can be felt in nearly every aspect of my life,” our team member Noah Bellemare said about Model UN, “from making new friends to finding productive compromises with people I might disagree with, to conducting academic research with speed and efficiency!” As Michael Bloomberg in the Democratic National Committee (DNC) leading up to the 2020 Democratic Nomination, Noah found it to be “a valuable and rewarding experience to see things from a different perspective and learn about a person who I would otherwise know nothing about!” As a crisis committee, the DNC was tasked with finding the best possible candidate to win the White House, while navigating surprises and obstacles along the way.

Aside from focusing on present day issues and bodies like INTERPOL or the DNC, Model UN committees can also transport delegates back to historical assemblies and time periods.

Theo Katzman portrayed Sergey Sazonov, a diplomat from White Russia at the Paris Peace Conference of 1919. Tasked with representing the Russian perspective on issues concerning the post World War I order, Theo said that Russia’s “position of weakness” at the time stood out to him most. “Russia was weak and disliked by many of their neighbors, but wanted to be seen as the power they were pre-war. So I had to give off an air of power while also shifting the debate away from my own failings. This really gave insight into some of the stances of other nations such as Iran in a similar position today.” Participating in a historical committee is always an exciting challenge because you have the opportunity to change the course of history for a weekend. “We hopefully fixed the issue of post war Germany, but in reality we probably didn’t,” Theo said. “It's rather interesting seeing why people made the mistakes they did, because in these committees everyone comes in with hindsight.”

Even further back in time, MOSMUN President Jocelyn Koelb embodied Pierfrancesco de’ Medici the Elder in a historical committee on the House of Medici. Representing the oldest member of the Medici Family Bank of Directors found her tasked with debating Florentine taxes and bank business dealings, as well as navigating alliances in the politically polarized Italian states. Her committee was a crisis committee, which meant her time at SSUNS was spent balancing substantive work in the committee room, and creative work out of the committee room. “My favorite part of SSUNS is how much creative license the staff give you to accomplish your plans,” Jocelyn said. “It was really fun to push the limits in what I could get done, both in collaboration with committee members, and on my own through my writing. Researching this super-historical committee was a challenge, but a really rewarding one.”

This SSUNS, we also had several new MOSMUN team members join us as observers, in order to learn about the Model UN experience firsthand prior to attending their first conference coming up in February. For Olivia Morrison, her favorite part about observing SSUNS “was getting to see my friends’ high points and excitement during the conference. I loved listening to them talk about their experiences and triumphs and getting to partake in the specific excited-nervous-energetic feeling that only shows itself at a conference. I definitely joined Model UN to develop communication and research skills, as well as to learn about global issues and work with some lovely people; but I also joined after several years of refraining from doing so because of doubt and anxiety about my abilities. I joined largely to prove myself wrong that I couldn’t, and since I have, I’ve felt my confidence grow both within and outside of Model UN.”

Gracie Morrison also enjoyed attending SSUNS as an observer. She joined Model UN for “two main reasons -- 1. I wanted to improve my public speaking. 2. I really didn't know much about the UN or what participating in a conference was like, so I wanted to challenge myself to learn about these subjects. I am excited for all aspects of Model UN, but I'm especially eager for BOSMUN, my first conference! I can't wait to learn about a new, interesting topic each and every conference in the future.” Similarly, Gracie’s sister Olivia cited researching new topics as a major motivation for joining. At SSUNS, she “was astounded by the effort and creativity shown by the chairs and delegates when molding their characters and representing countries. Observing this conference has piqued my interest and gotten me ready to go for my first one!”

Our team was proud to come away from the conference with two delegate awards, but more importantly, increased team bonds. Four days of living, eating, and debriefing together in a new country brought our delegation closer than ever. MOSMUN advisor Cristina Drondoe has always emphasized that each conference is an opportunity for personal growth as a delegate, and SSUNS was certainly a success for our team in this aspect. Looking forward, we plan to keep everything we have learned at SSUNS in mind as we move into preparations for our next two conferences of the 2019-20 season: Boston University’s BOSMUN in February, and Boston College’s EagleMUNC in March.