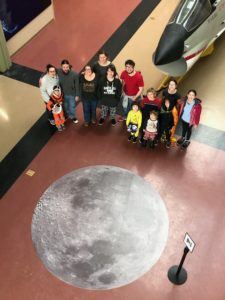 What do you get when you combine science, a planetarium, and pajamas? The ultimate homeschool field trip, of course. The McAuliffe-Shepard Discovery Center recently treated the homeschool community to two free homeschool overnight programs, and they were phenomenal. Thanks to a grant they secured, the Discovery Center was able to host 100 homeschool families who hailed from Maine, New Hampshire, Massachusetts, Vermont, and Rhode Island. The fact that each of the visiting states has their own science museum, speaks to the quality of and demand for this kind of homeschool program.

The closed museum re-opened it’s doors at 6:30 pm, allowing in sleeping bags, pillows, and really excited kiddos. We were shown our sleeping quarters, and they were right in with the exhibits! While we got to share a room with our friends among a hydroponics exhibit, others slept among galaxies, planets, an infra-red wall, and a Naval plane! While we couldn’t sleep in the planetarium, we certainly got to enjoy it thoroughly. After we set up our sleeping areas and perused the exhibits (the moon puzzle was my favorite), we were treated to not one but two planetarium shows.

Our first show was CapCom Go. The website describes it as an “immersive, historical documentary that showcases the achievements of the Apollo program and the amazing teamwork it took to put the first humans on the Moon,” to experience it is so much more. Hearing the recorded voices of astronauts and tracing their trials and tribulations is awe inspiring. From the women who calculated and wrote the code to the men who set foot on the terrain, the parents and kids alike were captivated by our journey to the moon. I was fascinated when each lunar landing point was mapped out on the moon’s surface right above my head. I hadn’t realized just how many times we had sent astronauts up there in so many phases of so many missions, and returned again and again. As the orb turned above my head, and pins with dates were dropped at locations on the moon, I learned about evolving experiments and personnel sent to explore our celestial satellite. I walked away knowing that another generation of astronauts had just been inspired.

After our show we were told about two magical things that would happen next; snack time and a scavenger hunt. Homeschoolers love snacks and knowledge quests, so off we went. My children enjoyed racing (at a walking pace) through the museum to record where basalt could be found, the symbols for planets, and the builder of a little wooden boat placed in the gallery (hint; he’s from our hometown of Derry). In true homeschooler fashion, there was much sharing of information, because after-all, we’re all stronger, and more knowledgeable when we work together. I’ll admit, I took the opportunity to work on the 8 foot, 9 section, moon puzzle that lay on the floor. It seemed a huge task, and I actually cheered when I got my first puzzle piece in. I’m glad I did too, because my “whoop” attracted some curious and very helpful kiddos who assisted me in my quest, until we were called away to put our pajamas on.

Happily-clad in our sleeping wear, we proceeded back into the planetarium to see Tonight’s Sky. There were many knowledgeable homeschoolers who already seemed to love the stars over their heads, and knew them by name. We were treated to the exact sky over our heads as we would’ve been able to see it if there were no clouds or lights in the city. Each of us searched the sky for constellations we knew well, and the kids loved the pictures superimposed over them. “Traveling” to the Pleiades while never leaving your seat, is an experience I can wholeheartedly recommend. Moving through space makes one truly able to conceptualize and see that stars in clusters and constellations do not exist all on one plane. By the end we were all convinced to travel to a place with no light pollution on a cloudless night to see the plethora of stars twinkling there.

Retiring to our sleeping bags was a wonderful idea, but for some reason the kids in my care took it as a sign to chat really excitedly to their friends for a few hours. I apologize to anyone whose sleep we may have disturbed, but it’s really not every day your nightlight is a red countdown clock!

After breakfast the next morning, we finished our scavenger hunt and were rewarded with a patch for our efforts! I was proud of my kiddos for their accomplishment, but there was one thing I had to do before we left for the day. Only two sections of the moon puzzle had been completed, but I knew that with the right crew and a heap of determination, we could do it. I noticed that after a while of sitting, my fellow workers would stand to shift perspective and see things a little further away, I tried it and I noticed things I hadn’t before. The kiddos around me communicated to each other; asking for pieces, wondering about edges and matching craters. We were working with strangers as well as friends and our ages were as numerous as the pieces of the puzzle we were fitting together. Each piece was celebrated as it went in and we encouraged each other when the inevitable sense of overwhelm set in. We were in a race against time (there was a wedding coming in behind us and we had to clear out), but we had been granted permission to reach our goal. The excitement was palpable as the sections grew and the individual pieces dwindled.

I learned a lot during my overnight at the McAuliffe-Shepard Discovery Center. I learned about the importance of setting a goal and working hard to achieve it. How teamwork, communication, and determination make the sense of accomplishment a shared experience. How each person who contributes to a project is incredibly valuable for the role they play. And I learned that enthusiasm and commitment really can get us to the moon, even if it’s only a puzzle. I can only imagine what everyone else was privileged enough to learn while in their pajamas that day.