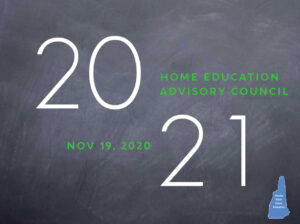 The meeting was recorded and is available on the GSHE YouTube channel. Also, the GSHE website posts all 2020-21 HEAC videos here.

Chairman Kitty (GSHE) informed the council that the state Board of Education approved the proposed version of Ed 315 without any amendments. The council voted to approve it, again, and it now moves forward to the Joint Legislative Council on Administrative Rules (JLCAR) for a public hearing and review. The new legislature was recently sworn in, so JLCAR does not have meeting dates and agendas available yet.

Kitty also shared with them that GSHE hosted an open Q&A discussion about homeschoolers transferring to their local public school and how to maximize credits towards graduation. GSHE also has a video on this topic and featured this topic in our November newsletter.

GSHE worked closely with the NH Department of Education because we discovered over 50 SAUs have outdated policies that do not reflect the 2012 law changes and are often issuing incorrect acknowledgement letters. As a result, the DOE issued a technical advisory in late September. The NH School Board Association of NH drafted a new version of Policy IHBG, likely because this issue was brought to their attention by the technical advisory.

Catie (SCHEA) said many families are frustrated by the flip-flops between hybrid and remote learning so they are reaching out about homeschooling as an alternative.

At their November meeting, the state Board of Education approved the proposed version of Ed 315 HEAC gave them in June without any changes.

George was not fully satisfied with the revision, saying that the old rules were “more comprehensive” and the new one “will create confusion” noting that the old version has “duties of parents” and “duties of Participating Agencies” labeled in a way that was clearer.

Stef pointed out that the changes in Ed 315 as proposed creates renumbering of sections that are not correctly reflected in the proposal and will be noted by Kitty as it is advanced to JLCAR.

George made an improper motion to “approve the rules with reservations” so it could not be considered. Then the council voted to approve the Ed 315 proposal with the renumbering change with one dissenting vote and it will move forward to JLCAR for an upcoming meeting.

I shared with the council the sample policy by NHSBA and mentioned two of the more significant problems with it: the sample policy incorrectly says families must provide notice on or before beginning a home ed program and the ages of compulsory attendance, and fails to note that Participating Agencies must provide an acknowledgement letter within 14 days of receiving a family’s notification. Kitty asked council members to provide input and she will forward comments to Commissioner Edelblut. Hopefully this will allow these concerns to be handled in a comprehensive way instead of district-to-district.

HEAC’s next regular meeting is on Thursday, January 28, 2021 beginning at 3:30pm; the Zoom link is not available yet, but we will share when it becomes available. If the council calls a meeting this month, it will be on December 19 at 3:30pm with this link. HEAC meetings are open to the public and all are welcome to attend. The contact information of HEAC members can be found here.