There is no feeling quite like walking into a room and seeing your art on display for all to enjoy. Artist, art teacher, and homeschool mom Beth Asaff knows this  feeling first hand, and worked hard to provide that experience for homeschooled artists in New Hampshire. Every reaction from awed whispers to squeals of excitement could be heard at the Marion Gerrish Center as children ages 5 to 18 came into The Homeschool Art Show on April 9. 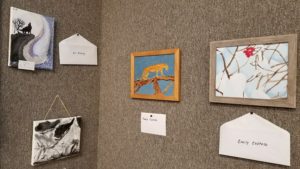 As one strolled through the two rooms of art you were treated to paintings, sculptures, and drawings, with mediums that were marvelously imaginative. A beach scene by Madeline Giampa featured real sand, an ostrich by Sara Grace Cozzi included a magazine clipping of an ostrich head, 7 year-old Erika Lamson used recycling as the basis for her robot, and Eli Missing and Travis Dauwer used legos to express themselves.

One dachshund enthusiast, 11 year-old Marissa Klomp was very “happy to show off her dogs.” She entered dachshunds in three separate mediums; clay which had been sculpted, dried, and painted, five canvases she had painted over several weeks, and glued mosaic block. Dachshunds are her perfect dog due to their active yet cuddly nature, although she does not yet have one of her own (hint, hint mom). As far as her feelings about art Marissa had this to say; “I love how you can personalize it and make it simple and yet beautiful.” 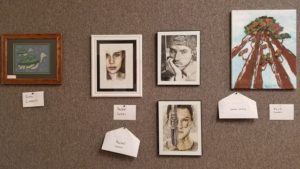 envelope hanging beside each artist’s work. This feedback envelope was a way for attendees and fellow artists to leave positive comments about the artwork they saw. Whether commenting on each of the three pieces the artists entered, or on the artist as a whole, comments were written on note cards and slipped into the envelopes. Some comments were anonymous and others were signed, but all of them gave encouragement to these young artists, many of whom were experiencing an art show for the first time. Beth chose to add this element to the show so the artists could get feedback the way they would in a judged art show environment, but without the pressure of the competition.

Jack Glaser, 8, was especially excited about the feedback portion of the show. He enjoyed “hanging back and observing what the people who were checking out his art work, and putting cards in the envelope were acting like.” Indeed seeing reactions to the artwork was one of the pleasures of attending the art show. Many people immediately gravitated to the incredible portraits sketched by 18 year-old homeschooler Rachel Cozzi. Her talent, hard work, and attention to detail were immediately obvious in her framed drawings. Other works, like “Circle of Colors" by 10 year old Connor Maguire became more fascinating the longer you spent with them. Connor taped a wire border in a circle onto a sheet of paper, then taped markers to a few robots and set them loose inside the wire. The result was a burst of colors that resembled entropy incarnate. Killian Lawless, 10, created a diorama titled “Downed Huey Vietnam War” that elicited a variety of emotional reactions. From hushed respect and curiosity to animated excitement, the authentic scene showed not only his artistic vision, but his extensive historical knowledge of the war.

What was your favorite part of the art show?

“Showing my art and seeing other people’s art”-Jack.

“Seeing how well designed, simple and beautiful art is.” -Marissa.

“Looking at the others' art.” -Riley.

“The creativity of kids using their imagination and common things to make wonderful art pieces.” -Nate.

“I was very impressed with all the creations.” -Lauren.

“My creations displayed somewhere else other than home, the feedback cards I could give to others and vice-versa, and the snacks!” -Killian.

“My favorite part was how excited the kids were; for instance, I overheard one little girl point out to her sister that her sister's art was hanging on the wall! That, and watching the kids take the job of leaving feedback for one another so seriously.” -Beth.

Personally, I was thrilled to see the kids have a place to showcase something they had worked hard on and get outside feedback from the public. Oftentimes in homeschooling our kids will work hard to learn and create things but not have a dedicated outlet to show off their accomplishments.

Many, many thanks to Beth Asaff and her team of volunteers; Lauren Lawless, Michelle Levell, Katherine O’Brien, without whom this show would not have existed, and to and the Marion Gerrish Center in Derry for hosting. We are already looking forward to next year so keep creating!