Several homeschool families are recipients of New Hampshire's Education Tax Credit scholarship. That program is threatened by House Bill 632, that would repeal the program.

New Hampshire’s Education Tax Credit (ETC) program was created by the legislature in 2012 and launched in January 2013. Businesses and individuals may make donations through the ETC program and receive credits against their Business Profits Tax, Business Enterprise Tax, or Interest and Dividends Tax. These donations are then given as scholarships to low-income children, those most at-risk for life-long academic challenges, for tuition at an alternative education provider or for home education purposes.

Per statute, eligibility is based on two criteria: 1) the family’s annual income must not exceed 300% of the federal poverty limit, which is $75,300 for a family of four; and 2) the child must be “switching” from his or her local public school to an out-of-district public school, a private school, or a home education program, or as of 2018, be a new Kindergartner or 1st grade student entering one of these alternative educational environments.

To date New Hampshire’s program has been utilized by 877 children. For the 2018-2019 school year, there are 413 scholarship recipients; 62% are at or below the federal Free and Reduced Lunch poverty line, which is $46,400 for a family of four; and 16% of scholarship students have special needs.

There are two approved scholarship organizations in New Hampshire; the Children’s Scholarship Fund NH and the Giving and Going Alliance.

Below is information about the repeal effort and what families may do, if they wish to support the program before the entire NH House of Representatives votes on the bill this coming Tuesday, March 19th.

The article was originally published on School Choice for NH and shared with permission. 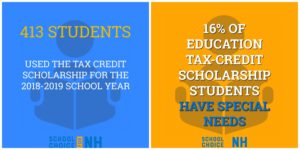 The House Ways and Means Committee voted on the Education Tax Credit (ETC) repeal bill, HB 632, earlier today. We blogged their discussion on our Facebook page; you can see a series of posts dated March 13th to follow along.

The entire NH House of Representatives may vote on the ETC repeal bill as early as next week. This is the time to contact your state representatives, urging them to support the program and reject HB 632. See the TAKE ACTION section below for more information.

The motion to pass the bill was made by Rep. Thomas Southworth, seconded by Rep. Lisa Bunker. Immediately, Rep. Jerry Stringham introduced an amendment that would greatly reduce the tax credit from 85% of Business Profits or Enterprise Tax to only 10% because he does not understand how the tax credits are allocated to donors. He incorrectly thinks businesses make a profit from the donations even though that was refuted in the public hearings. Rep. Charles Burns characterized this amendment as a “slower death” to the scholarship program instead of the instant one as proposed in the original bill.

Rep. Jennie Gomarlo asked why the ETC program has raised only $1.2M instead of amounts closer to the $5M cap and Chairman Susan Almy made the absurd statement that “businesses are concerned about the scholarships going to religious institutions.” Rep. Jess Edwards immediately asked to have Kate Baker from the Children’s Scholarship Fund NH address that concern. Ms. Baker stated that there are two barriers: 1) that many businesses are unaware of the ETC program, and 2) the donation process is bit cumbersome. As an example, potential donors need to make estimations about the taxes they expect to pay and the process is not available online. She also reminded the committee that it would be discriminatory to exclude religious schools from school-choice programs.

The committee then voted on the amendment, which failed.

An extended debate about the original bill, that completely repeals the ETC program in 2020, began as the committee considers the Ought to Pass motion. Rep Southworth stated that he thinks the program and participating schools have little oversight and that the program may be unconstitutional. Rep. Burns said that is speculation as other states with Blaine Amendments believe these programs are constitutional; leave it to the court to decide. He also says that the private schools have tremendous oversight; they are accountable to the families directly who can walk away from the schools if they are not providing a satisfactory educational experience for their children.

Chairman Susan Almy repeated the assertions that private schools discriminate and the scholarship organizations have no oversight. She ignored the numerous accountability mechanisms in place, including annual surveys of families about their satisfaction with the program, multiple reports to the Department of Revenue, and independent audits.

She then said that the ETC was “set up to take money out of public schools when the student transfers. It is almost always schools that are financially struggling. Other students want to get out, but must stay because they would not be accepted by the religious schools.” This is wrong on so many points. Fundamentally she asserts that children are funding units for schools; instead of focusing on providing education to children, they are enrolled to provide financial support to the schools, according to the representative. Her statement that these students would not be accepted at religious schools is wild speculation without any evidence. Her comment also ignores that the families, not the scholarship organizations, determine the education provider (school or home education) for their children.

Rep. Edwards reminded the committee that the program is not funded by state money, but by private donations from businesses and individuals. He mentioned that the current cost of public school is over $15,000 per pupil. By comparison, these private scholarships which average roughly $2,700 are “cheap money that supports our students.”

Rep. Alan Bershtein reiterated that the state has a responsibility to support education, not public schools. The program also encourages public schools to be responsive to the needs of their communities, by introducing market competition to spur improvements.

Rep. Jordan Ulery also pointed out that the constitution calls for supporting education without specifying public schools. The constitution says public money should not go to religious institutions, but the ETC is funded by private donations, not state money.

Rep. Bunker said that the charity (meaning the scholarship program) serves a good purpose to help bullied students, but “should not be underwritten by the state,” again asserting that donations before taxes are even paid somehow belong to the state.

A little later, Rep. Gomarlo said that “the bill doesn’t get rid of the program, just the tax credits.”

Rep. Patrick Abrami pointed out that New Hampshire has five other tax credit programs, but they are not targeted with legislation to reduce or repeal their programs. Only the ETC that supports our most at-risk students is facing attack. He repeated how effective this program is and that it “would be wrong to pull the plug on over 400 children” who rely on the scholarships for their education.

Rep. Richard Ames mentioned that the ETC program faced a legal challenge a few years ago and the NH Superior court judge issued an opinion – not a ruling – that he thought the program is unconstitutional. He neglected to say that the NH Supreme Court later ruled that the plaintiff had no standing. Other ETC programs in states with Blaine Amendments have withstood these challenges and succeeded in all but one recent case. We expect this issue will go to the Supreme Court of the United States in the near future.

The committee closed discussion and voted on the motion, Ought to Pass. The roll call vote was 10 to 9 with Rep. David Karrick as the only Democrat to not support the bill.

The entire NH House will soon vote on the ETC repeal bill, HB 632, maybe as early as Tuesday, March 19th. This is the time to contact your own state representatives, urging them to support the ETC scholarship program by voting NAY on the Ought to Pass (OTP) recommendation by the committee.

CALL: Phone calls are especially effective, particularly if you share what educational opportunities mean to you and your family. Mention you are a constituent.

EMAIL: This can be effective and is one of the easiest ways to communicate with your representatives. You may use this easy tool to send an email to your state reps, urging them to reject the ETC repeal bill. The message can be customized for even greater impact. Please share the link with your friends and family, too.