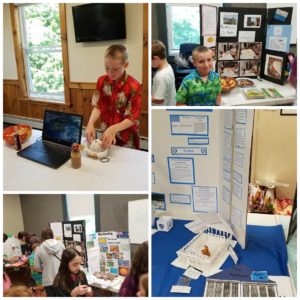 While June 3 may have seemed like a normal Monday, a large group of homeschoolers and their families gathered at the Marion Gerrish Center in Derry for a treat; several treats actually! The second-annual Homeschool World's Fair featured around 15 countries done by over 20 homeschoolers.  The countries represented this year included; Turkey, Iran, Romania, Egypt, Mexico, Australia, Republic of San Marino, China, Scotland, Saint Maarten, Germany, France, Italy, Iceland, and Greece. Individuals and sibling groups worked to prepare posters, computer slideshows, costumes, books, cartoons, and food from each of their chosen countries. Interactive displays provided visitors with activities like reading books simultaneously in Farsi and English, learning to say Captain America in German (Bildunterschrift America, in case you were wondering), and removing the roof from the Parthenon to take a peek inside, while nibbling on homemade Baklava!

When visiting Iceland, one was treated to delicious cookies, beautiful photos from family trips, and costumes worn by the presenters themselves. In Italy, not only were you able to meet real, live Italians wearing tye-dyed shirts, but you also saw models of both the Leaning Tower of Pisa and the Colosseum! The pizzelle cookies were delish too. Italy was not the only country where the presenters had chosen to showcase their heritage. Iran, San Marino, Scotland, Germany, and more had students presenting on their family’s history. Other presenters, like Mexico, China, Saint Maarten, and Greece, delved into countries they found fascinating - and they did a fantastic job. From Romanian fairy tales to Mexican chocolate, French photography, and Australian cake (nope, no Vegemite!), a fairgoer was educated, entertained, and impressed. Each student knew his or her country well and truly enjoyed talking about it and answering questions. Although they ranged in age from 3 to 15, the students conversed easily and knowledgeably with each other and the visitors who stopped by. You could learn about economics, flags, language, and exports just as easily as you learned about festivals like the Turkish Women’s Bicycle Tour and China’s Tet Trung Thu. 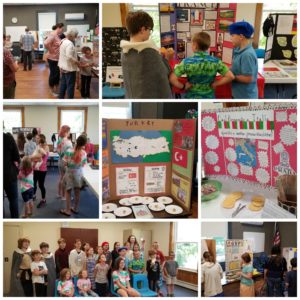 The organizer, homeschool mom Christine Smith, put together a fun scavenger hunt with questions that could be answered from each country’s board, and a map to color in the locations of the various countries. It was easy to see that her hard work paid off as each family enjoyed themselves on that beautiful June morning. The students had just as much fun learning about other countries from their peers as they did sharing their own knowledge. Everyone seemed just as eager for next year’s fair as they were for the pizza party at the end.

Thank you very much to the Marion Gerrish Center for their continued support of homeschoolers in the Derry area. To Christine Smith for organizing, setting up, and cleaning up, and congratulations to all the presenters; you are an asset to our homeschooling community. Job well done by all!